How Many Trees are Planted in Canada Each Year?

I've been curious to know approximately how many trees are planted in Canada each year.  Apparently, I'm not the only one, since several other people have asked me this same question over the past month.  I'm going to try to come up with a very rough guess here, based upon what little information I can find, coupled with some semi-educated assumptions.  If anyone has any access to official data for any of the provinces, please let me know so I can update this post!  I originally wrote this post for my commercial tree planting blog, but it's good information for anyone thinking about our national capacity for tree planting for carbon capture purposes.

British Columbia
This one is easiest, since the Western Forestry Contractors' Association pays close attention to these numbers, and publishes charts frequently.  Their best guess for 2020 planting in BC is approximately 308 million trees.  They base their information upon a survey of sowing requests at various forest nurseries.
Source:  https://wfca.ca/2019/09/western-forestry-contractors-association-rumour-mill-roundupdate-volume-19-issue-13/

Alberta
I have 2016 data for Alberta.  That year, the province planted 57,605 Ha of the 83,786 Ha harvested (the rest was left for natural regeneration).  Assuming an average planting density of 1500 stems/Ha, which is purely a guess, I estimate approximately 86 million trees.

Saskatchewan
I have 2016 data for Saskatchewan.  That year, the province harvested 17,701 Ha.  Let's assume that they planted half of that amount, and that the average planting density was 1500 stems/Ha.  Those assumptions may be quite inaccurate, but the number of trees in Saskatchewan doesn't significantly affect the national total.  I estimate approximately 13 million trees.  Lots of room for growth in the northern boreal.

Manitoba
I have 2016 data for Manitoba, which is very similar to Saskatchewan in limitation.  Manitoba harvested 10,686 Ha in 2016, so if we again estimate that half of that area was replanted, at a density of 1500 stems/Ha, we have another 8 million trees.

Ontario
In 2016, Ontario planted 67,369 Ha of land (57% of the 117,230 Ha harvested).  If we estimate a planting density of 1500 stems/Ha, that works out to approximately 101 million trees.  Incidentally, Ontario is the only province that also seeds significant areas.  In 2016, about eleven thousand hectares were seeded throughout the province (this figure is not included in the planting totals).

Quebec
I have 2016 data for Quebec.  Quebec harvested 205,859 Ha and planted 36% of that (73,344 ha).  Incidentally, Quebec is the only province that harvests a greater land base annually than BC.  Let's again assume an average planting density of 1800 stems/Ha (this number based upon feedback from several long-time Quebec tree planters).  That gives us about 132 million trees planted annually in Quebec.

The Atlantic Provinces
There's a surprising amount of planting in New Brunswick and Nova Scotia.  Not as much in Newfoundland, and practically none in Prince Edward Island.  It's hard to tell how much planting actually takes place, because a very large percentage of blocks in the Atlantic provinces are left for natural regen.  Despite this, I know that several hundred planters work in the very fragmented industry each year.  Perhaps the best indicator would be to get a census on total sowing at all the forest nurseries in those provinces.  I'm going to have to guess for now, in lieu of any sort of reasonable data, and say that 40 million trees are planted each year in these four provinces combined.  I did find that New Brunswick planted 17,625 Ha in 2016, Nova Scotia planted 5,024 Ha in 2016, PEI planted 317 Ha, and Newfoundland planted 3,721 Ha, for a four-province total of 22,167 hectares.
Source:  https://cfs.nrcan.gc.ca/statsprofile 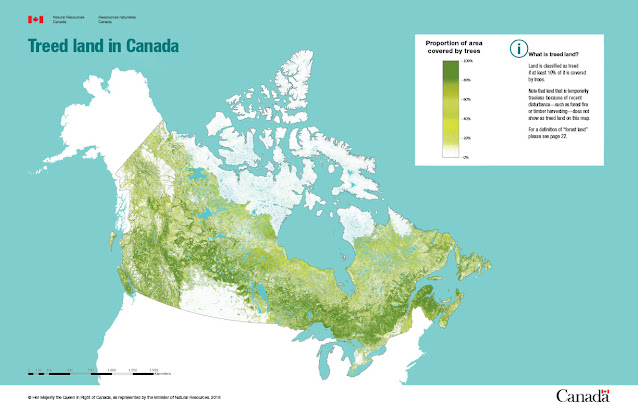 Well there you have it.  There are probably several inaccurate numbers in there, but hopefully the mistakes balance each other out to some extent so that the overall total is reasonably close.

Incidentally, I found data from Natural Resources Canada which states that 410,221 Ha were planted in 2016, Canada-wide.  Too bad that they didn't give the number of trees.  Anyway, if our estimate of 688 million trees is correct, then that would suggest that the average planting density across the country is approximately 1677 stems/Ha.  This seems reasonable based upon personal experience.

Our organization is often seeking additional land for our carbon capture projects.  Please visit this link if you might know of a recently-harvested property that we could rebuild into a permanent legacy forest.